The town of West Warwick was formed in 1913 after separating from the City of Warwick. What is now the town of West Warwick was originally a highly industrialized and democratic portion of Warwick while the remainder of the city was primarily agricultural based and Republican. Due to the differences, community leaders voted to separate and West Warwick became Rhode Island's newest municipality.
Despite being the youngest town in Rhode Island, firefighting in West Warwick has a rich history that predates the town itself. Prior to becoming its own town, the area was served by a number of village fire departments. These village fire departments continued to provide fire protection for decades to come after the town was incorporated. Each village department had their own stations, chiefs, and ability to raise revenue. The village departments that served the citizens of West Warwick were the Natick FD, Crompton Fire Department, Riverpoint Fire Department, Phenix Fire Department, Lippit Fire Department and the Warwick/Coventry Fire Department which served the villages of Arctic and Centerville.
As early as 1922, town leaders recognized the need for a unified fire department. In that year, town council members passed an act authorizing the Warwick/Coventry, Crompton, Riverpoint, and Phenix fire departments to be abolished if the districts themselves voted to do so and authorized the formation of a town fire department. Despite these initial efforts, it would be years before further steps were taken to dissolve the separate village departments and form the town-wide fire department.
Shortly after the conclusion of World War II, town leaders again addressed the issue, this time with more vigor. The act passed in 1922 was amended by the town council in 1946 and submitted to the RI General assembly in 1947. On 05/28/1947 the General Assembly passed the West Warwick Fire Department Enabling Act. Several days later town council members made final amendments to the act and approved the formation of the town fire department. In anticipation of its need, the council also approved $14,555 for a Gamewell fire alarm system. At this time, Lionel Gareau, the chief of the Warwick/Coventry Fire Department was named chief of the new department.
In March 1948, after discussions with the remaining fire districts, the town department was made permanent. On 05/26/1948 the Crompton Fire Department merged with the town and Natick Fire Department followed on 06/02/1948. In June the town council approved the budget for the 1948/49 fiscal year; the newly formed fire department was given a budget of $60,282.
In the following years, the department would continue to grow, adding permanent members as well as call-men. Paid members worked alternating 12 hour shifts. The firefighters recognized the need for representation and became unionized on June 5, 1952, joining the International Association of Firefighters as Local 1104. In 1956, the town approved a pension system for firefighters and police officers. On the night of 11/11/1959 West Warwick suffered its first line of duty death. Captain Joseph Lionel St. Jean died while fighting a structure fire on Knight's Farm. Reports indicated that
Captain St. Jean “took in a lot of smoke” and collapsed in the building. At the time of Captain St. Jean’s death, there were 26 paid members and 100 call-men on the department. Paid firefighters earned $38.00 per week.
The 1960's continued to be a period of growth for the department. In 1960 WWFD purchased its first aerial ladder truck, a Maxim, for $60,000. Prior to this purchase, city service ladder trucks were used in the town. In 1961, Fire Alarm (dispatch) was staffed 24 hrs a day and the town spent $35,000 on addition street boxes. Through the efforts of Local 1104, several contracts had been negotiated and as a
Beginning in April 1970, the firefighters began to work a 42 hour work week which consisted of two 10 hour day shifts, two 14 hour night shifts followed by four days off. This schedule was a hard fought victory for Local 1104 and West Warwick became one of the first departments in the region to switch to this new schedule. In 1971 the citizens of West Warwick approved a bond measure for $295,000. These funds were used to purchase three new Maxim Pumpers, a ladder truck and to add an addition to station three. Also included in these funds was the construction of a new station 4 on Cowesset Avenue in Crompton. The new three bay station replaced the considerably smaller, single bay station on Main Street which was originally built in 1893 to house the Crompton Hose Company. On 01/01/1974, Deputy Chief Raoul Gareau was named Chief of the department, replacing retired chief Pryor.
During the late 1970’s West Warwick began to experience an economic downturn. Manufacturing centers shut down and the once bustling shopping district witnessed many local businesses forced to close shop due to the recently opened malls in neighboring Warwick. A withering economy, aging inventory of old mill homes, several rashes of arson fires along with low staffing levels would keep the firefighters in town busy for the remainder of the decade. 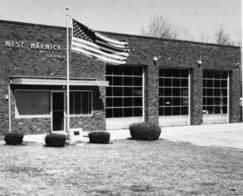 ​result, a firefighter’s salary increased to $82.60 per week in1963, more than doubling the average salary paid just four years prior. In 1964, after a long and distinguished career, Chief Gareau retired and James Pryor was named chief of the department. 1965 brought West Warwick's second line of duty death. Firefighter Joseph J. Ventura died after battling a blaze at the West Warwick Middle School.
On 06/16/1980, Battalion Chief Maurice Boisclair became the newest Chief of the department due to the retirement of Chief Raoul Garreau. The department continued to be plagued by manpower issues despite an ever increasing number of emergency responses. This would become a contentious issue between the firefighter's union and town leaders for years to come. It was during this time that, because of diminished interest and insurance restraints, the decision to do away with the remaining call-men on the department was made. Three out of the four stations in West Warwick were now staffed with lone firefighters.
On 07/01/1984 Battalion Chief Don Centracchio became Chief of the department, filling the vacancy left by the retirement of Chief Boisclair. After several more years of activism on the part of the union, the town council agreed to add four additional firefighters to the department. Each of the four shifts would now have a second firefighter placed at station four, which covers the largest district in the town.
On 03/01/1990, firefighters were dispatched to a structure fire at 590 Providence St. The first arriving apparatus, Engine three, found heavy fire showing from the multi family apartment building with a report of occupants still in the building. At this time, Engine three was still staffed with a single firefighter. One child was killed as a result of the fire. This incident brought more attention to the staffing needs of the department and as a result, four additional firefighters were hired and each shift added a second firefighter to Engine three. Chief Centracchio retired and Battalion Chief Richard James became chief in November 1993.
The nineties would be a decade of continued staffing debates, labor disputes and difficult negotiations with the town. It would take considerable concessions of behalf of the firefighters, a series of arson fires and several tragedies until additional manpower was put in place. By the end of the decade, the ladder truck was staffed with a second firefighter and Engine two in Phenix was staffed with a second firefighter as well. A second rescue was placed at station two and this was cross-manned with Engine two. As the decade came to an end, the department saw another Chief retire. In December of 1999, Chief James ended his career and Battalion Chief Richard Rita became Chief of the department.
The new century brought with it triumphs and tragedies. Shortly after the arrival of the latest Chief, Charles Hall in September 2002, West Warwick was the site of one of the single largest fire related disasters in US history. On 02/20/2003, firefighters responded to The Station nightclub for a report of a structure fire during business hours. The rapidly spreading fire took the lives of 100 patrons and injured hundreds more. Mutual aid rescue companies from as far away as Massachusetts responded.

On the night on 03/30/2005, West Warwick experienced yet another large mill fire. The Phenix mill complex would require the response of all on and off duty personnel as
In January 2010, after decades of discussions, negotiation and concessions, the second rescue truck in Phenix was staffed full time. At this time, West Warwick Fire Department responded to over 5000 rescue runs annually with only one full time rescue. A rainy spring resulted in a series of floods throughout the town in 2010, culminating with historic flooding throughout the town and the region in the final days of March . Although the town had experienced flooding numerous times in the past, this was a never before seen level that stretched the department's resources and kept firefighters in town working continuously for several days.
Due to necessity, coupled with some well timed grants, the fire department was able to replace the remaining two front line engines in 2011. At the time of its replacement, Engine 2 in Phenix was older than some of the firefighters driving it. 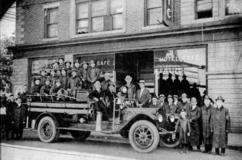 This pumper truck was the first piece of motorized equipment purchase by West Warwick in 1918
WWFD purchases first ladder truck.
In the first half of 1948, the fire department began to take shape. On January 27th, the Riverpoint Fire Department dissolved and relinquished firefighting duties to the town. A ceremony was held at 8:00 PM at station 3 (now WWFD St. 2) to acknowledge this change. At that time, Riverpoint Fire Department gave its equipment to the town, including a 1940 pumper, 1928 hose wagon and their fire alarm system.

A bond was approved in 1971 for the construction
of Station 4 which is located on Cowesett Ave. 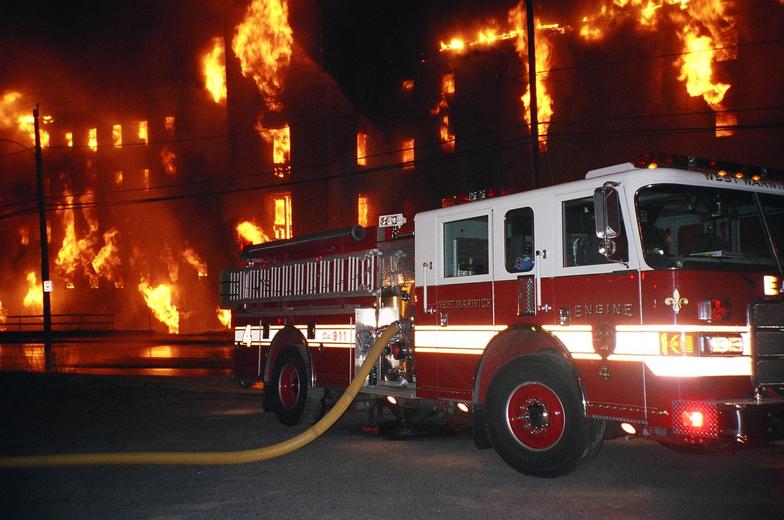 well as a large amount of mutual aid. Both engine 3 and Engine 4 would be replaced in the first half of the 2000's, replacing two pieces of aging apparatus. Chief Hall would retire at the end of 2007, leaving the department with interim chiefs from within the ranks until June of 2008 when Joseph Baris would be named chief of the department.
Continue Here to Timeline >