Despite its small size and brief history, West Warwick has been witness to a number of large scale events. Some of the more significant events follow:
1885- Phenix Village:  Large fire which consumed several buildings including the Briggs Motel and a Methodist church.
3/12/1888- Phenix Village:  The Mumford Building and the railroad station burned on the night of
“The Great Blizzard”
1909- Arctic Village:  Numerous buildings and businesses burned in Arctic Square
1/29/1919 Royal Mills fire:  Royal Mills was a large stone mill built in 1859 that employed more than 500 people in the area. The fire started in the 275 foot high clock tower as early as three hours before it was reported. Witnesses believed that the “glow” was workers working on the clock. Once flames were visible on the exterior of the building, the alarm went out and all village departments responded. The fire grew, causing the tower to collapse through the roof of the mill, igniting the second and third floor. Firefighters from Cranston,Warwick and Providence responded and remained on scene throughout the night. The fire caused more than $1.5 million in damage.
07/04/1941- Natick Mill Complex:  The Natick Mill was one of the largest mill complexes in the world, encompassing 18 acres. Several passersby, including a Patrolman, observed smoke and fire in the mill and alerted the firefighters in Natick. The fire grew rapidly and mutual aid was summoned from all surrounding villages, and throughout the state and from as far away as Massachusetts. The mill was a total loss, numerous firefighters were injured, several surrounding buildings were burned as well as a pumper from the Natick station.
02/15/1971- Brayton Foundry:  Located at 54 E. Main St, the foundry was a large brick structure which employed more than 300 people. Firefighters endured freezing temperatures as they battled the blaze throughout the night.
06/20/1971 Junior St: One child was killed in a fire in a multi-family apartment building. This fire, which was one of several fatal fires in 1971, was deliberately set. One man was charged in the death of the child.
08/20/1972- St. Onge Store:  Located at 1220 Main St, the St. Onge store was a 78 year old clothing store and one of the leading retailers in the busy shopping district. Firefighters were called to the store at 200 PM. Shortly after arrival, due to deteriorating conditions, the response was upgraded to a General Alarm. More than 100 firefighters responded including mutual aid from Providence,Cranston,Warwick and North Kingstown. The fire was deemed “under control” at 1030 PM that night. The fire caused more than $1 million in damages, damaged six other businesses and injured twelve firefighters.
10/30/1972- Crompton Grain Mill:  A small fire discovered in a storage room spread rapidly, eventually consuming the entire sprawling 100 year old structure.
09/19/1974- 64 Tiogue Ave: A propane leak was the cause of an explosion of a 4 unit “hotel-like” structure that killed two people and injured several others. The 80x30 building was completely leveled by the explosion which was felt as far as 3 miles away​.
1977- Natick Pool Hall Fire
1979- St John's Rectory: A fire which originated in the basement quickly traveled to the third and fourth floors of the rectory. First arriving personnel found the parish priest, trapped by fire, hanging from a ledge on the third floor. It would take 17 pieces of apparatus four hours to gain control of the blaze. The priest was treated for burns and smoke inhalation.
1979- WW High School Fire
05/12/1987- Agway Fuel Depot:  Ignited during a fuel delivery, the fire caused a massive explosion at the storage facility. 75 firefighters would battle the blaze for hours while also attempting to prevent further explosions of storage tanks, one holding 30,000 gallons.
03/01/1990- 590 Providence St.:  Multi-family apartment building fire which left one child dead. First arriving apparatus was only manned with one firefighter. This fire brought attention to the very low staffing levels of the department and opened more dialogue on the matter which would lead to increased staffing on the department.
12/14/1995- Playhouse Theater 85 Washington St:  At 1:30 AM, a patrolman observed flames coming from the boarded up structure. The fire quickly spread, getting into the many voids in the old construction, threatening neighboring businesses. The fire would claim two businesses that were total losses and damage three others.
12/23/1995- 66 Highland St:  Residential structure fire which resulted in five fatalities
02/20/2003- Station Nightclub fire:  Occupied nightclub fire started by pyrotechnics set off during a live performance resulted in 100 fatalities and hundreds of injuries.
03/30/2005- Phenix Mill 771 Main St: The mill, which was originally built in 1823, was vacant and planned for renovations into a townhome/condo complex. The fast moving fire was unable to be contained and destroyed the 5 story 328 foot long building. In its nearly 200 year history, the mill had survived five previous large fires.
03/31/2010 Massive Flooding throughout town: Heavy rains on top of an already saturated ground combined to cause the most dramatic flooding on record in the area. Many sections of town were inundated with water, Natick village being the hardest hit. 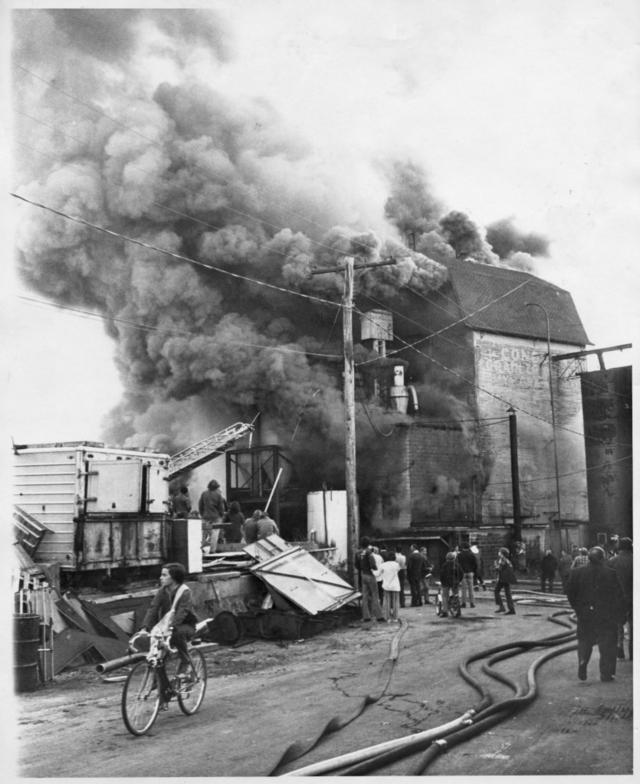 Crompton Grain Mill - 1972
05/15/1992-Crompton Mill 100 Pulaski St:  Firefighters were called around 8:00 AM for a report of a possible brush fire. Upon their arrival, they observed fire in a corner of the first floor. Within ten minutes, the entire structure was engulfed in flames. More than 100 firefighters from the area responded to the scene. The mill, one of the largest in the valley, was completely destroyed. 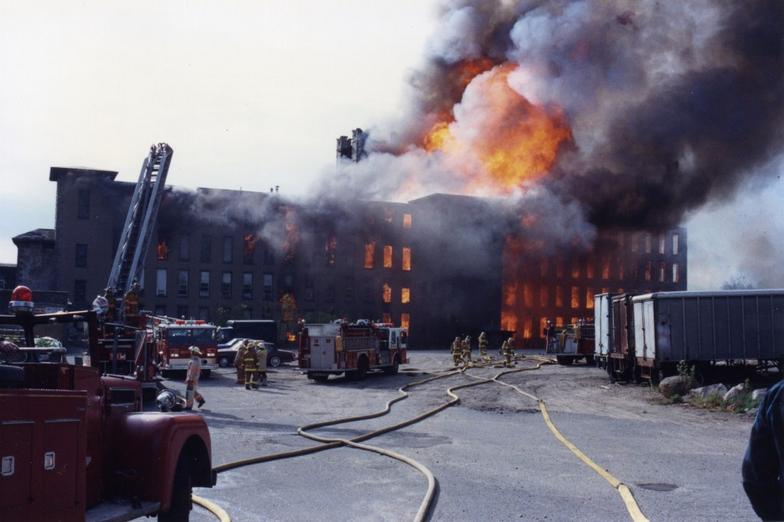